Researchers from the Department of Agroecology at Aarhus University have developed a system for terron classification at different scales based on gridded data, and used it to classify and map terron regions in Denmark incorporating soil, climate and landscape information.

Have you ever wondered, why wine made from the exact same type of grapes can taste completely different, when produced in different regions? Or why apples from one region taste better than from another? It all comes down to terroir, a concept that refers to geographic areas where soil and microclimate are relatively homogenous and impact distinctive qualities of food products such as wine. France has been divided into wine regions according to terroir for decades. Now researchers from Aarhus University have developed an automated system for terron classification and tested it by dividing Denmark into terrons.

”The idea of terroir originates from the wine industry. It is a French term used to describe factors that can affect a crop such as wine or any other food product. The factors can be environment, farming practices, climate, soil, topography, and so on. In this study we use terron classification, which is like terroir except it does not include the cultural side of things. So, we are looking at physical aspects such as soil, climate, and terrain. The aim was to develop and test a generic automated system for terron classification at different scales,” says PhD student Yannik E. Roell from the Department of Agroecology.

A system to cluster regions together

Using Denmark as a case study, Yannik E. Roell and his colleagues tested the new system to see whether it was easily executable and versatile.

“We developed a system, which is now published, so that anyone can use it and classify terrons. The system allows the user to set different input parameters, such as variables to cluster, method of modelling, output resolution and so on. What we did in our case study was to use different climate, soil, and terrain attributes for Denmark, feed them to the system and let it cluster them, so we could see which areas are similar to each other,” explains Yannik E. Roell.

“The first map is based on soil and climate. It is very broad scale, because the climate data in Denmark is at a much lower spatial resolution compared to the data on soil and terrain,” says Yannik E. Roell. He continues and states, “From this map, three regions are created and could be used as the new wine regions for Denmark.”

Normally, the wine regions of Denmark are divided into the regions of Zealand, Funen, and Jutland, but the new system clustered Denmark into three different regions as seen in the inset map of Figure 1. 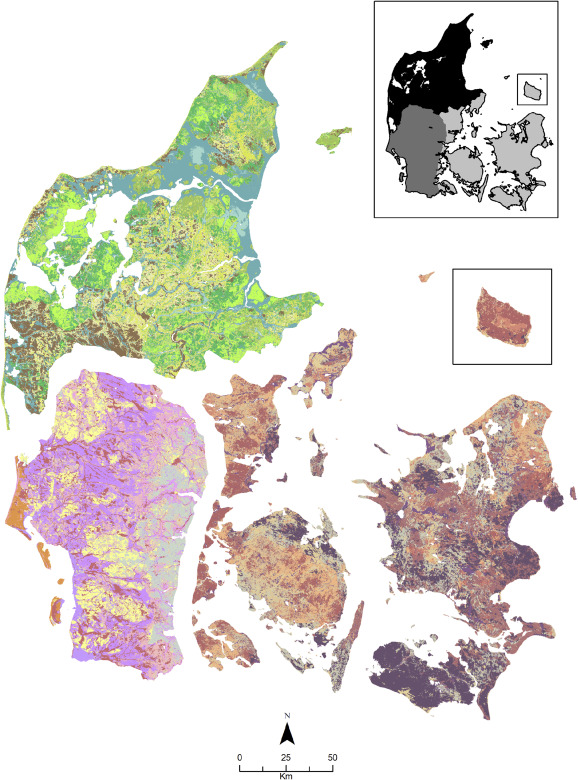 “The map shows us how big a variation you find in Jutland, which assures us, that it is way too diverse to be clustered into just one terron. With this map we can see how the regions should be divided to accommodate the differences in terron,” says Yannik R. Roell.

The second map is the main map of the study and differentiates areas within the larger national regions. It is based on terrain and climate, and it is in a much higher resolution.

By using data from 1688, the researchers were able to look at the natural potential of the soil.

“We call it the natural potential because 1688 was before the introduction of technology as we know it today. There were no tractors, machines, chemical fertilizer, liming, or an effective irrigation system. Today you can grow anything nearly anywhere in Denmark because the current technology compensate the soil potential, but that wasn’t the case in 1688,” says Yannik E. Roell.

By looking at the natural potential of the soil, the researchers were able to cluster the data into seven groups of terron:

The wetlands and the steepest slopes are called specialty cases since they cover small areas across the entire country. The other five groups were related to hard grain values from 1688.

“We ranked the five terrons from low to high in another map to validate the groups. And we found that fluvial sands in the west (group 4) had the lowest production potential and loamy soil in the east (group 2) had the highest,” says Yannik E. Roell. This grouping of terrons is the third main output map from the case study (Figure 2).

Fig. 2. Map of terrons grouped by similarities and map of hard grain value by parish level from 1688 used to validate the terron groups.

This case study shows that the system developed by Yannik E. Roell and his colleagues generates hierarchical terrons at multiple scales from variables at different resolutions.

“The system is user friendly, and can be used by many different people. It can determine fertile lands for a particular crop or areas prone to environmental risk. Our study demonstrated that terrons found by using our system were very useful in distinguishing the different regions in Denmark based on soil, climate, and landscape. We are confident, that our system will perform the same in any other region of the world as well,” concludes Yannik E. Roell.