By studying long-term field trials in Denmark and Switzerland researchers from, among others, the Department of Agroecology at Aarhus University have found that the greenhouse gas balance varies significantly between different organic cultivation systems.

The impact of agriculture on the climate and the environment has helped to strengthen the popularity of organic produce. According to researchers from Aarhus University there has been an increase in organically cultivated agricultural land in Europe by as much as 74% within the past decade. The impact of organic farming on nitrate leaching and on the climate via nitrous oxide emissions and carbon storage in the soil has previously been studied, but until now there has been a lack of studies from long-term field trials, but that is no longer the case.

“We have measurements from two long-term trials, one in Switzerland and one in Denmark. By using the measurements together with a simulation model, we have been able to estimate the greenhouse gas balances for both organically and conventionally cultivated fields,” Professor and Head of Department Jørgen E. Olesen from the Department of Agroecology explains.

Long-term trials in Switzerland and Denmark

The researchers have used measurements from two long-term field experiments. The DOK trial in Switzerland started in 1978, while the Danish trial in Foulum started in 1997. The trials compare different conventional and organic cultivation systems. Some of the organic ones are unfertilised, while others are fertilised with livestock manure. A total of eight different cultivation systems are compared, with four from DOK and four from Foulum:

The researchers used a simulation model (STICS) to calculate carbon and nitrogen flows in the cultivation systems. This model makes it possible to calculate emissions of nitrous oxide, which is a powerful greenhouse gas, and of changes in the soil's carbon pool, which also contribute to the total climate impact of cultivation systems. Before the model was used, a comparison and improvement of the model was carried out in relation to measurements from the experiments.

Measured per hectare and per kg of grain

“We have chosen to calculate the greenhouse gas balance both per hectare and per kg of grain in wheat, as both calculation methods are used regularly. In addition, wheat was included in both experiments and therefore provides a basis for comparison. There is a big difference between the systems, regardless of whether the emissions are calculated in one way or another,” Jørgen E. Olesen says.

The researchers have made an overview in which they have compared the greenhouse gas balance of different cultivation forms, which is calculated with the STICS simulation model in combination with standard values ??for emissions from fuel consumption in field operations. The great importance of the soil pool in the total climate load per hectare is due to the fact that in the long-term experiments it has been shown that there is a continuous reduction of the soil's carbon content at all experimental stages, ie. also where there is both clover grass in the crop rotation and livestock manure is added. In both experiments, there is the greatest loss of carbon in the soil in the unfertilised organic cultivation systems, because the yields are low and thus less carbon is added to the soil in plant residues and roots. 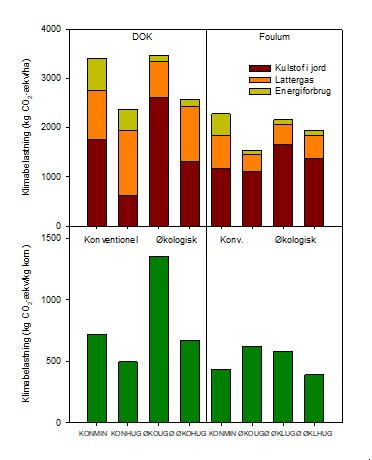 “Our measurements show a clear difference in the greenhouse gas balance for the five different organic cultivation methods. We see that the unfertilised fields have the highest climate impact, while the fields that were cultivated with catch crops, clover grass and fertilized with livestock manure (ed: ØKLHUG) had the lowest measured on the amount of grain, but not per hectare. This may be due to the fact that fertile soil and the use of livestock manure increase the yield, and high yields are crucial for a low climate impact per unit produced,” Jørgen E. Olesen explains.

Measured per hectare, organic cultivation with catch crops (ECOGO) has the lowest climate impact, while it is relatively high m eel per ton of yield, which according to Jørgen E. Olesen is associated with a lower yield.

The unfertilised organic fields show some significantly higher numbers than any of the other fields when measured in the amount of grain.

“Emissions per ton of grain are higher in unfertilised fields, but it does not surprise us. It has something to do with the fact that the increase in yield more than compensates for the increased nitrous emissions from the manure when the field is supplied with livestock manure,” Jørgen E. Olsen explains.

According to the researchers behind the analysis, the climate impact per hectare and kg of grain calculated on the basis of the two long-term experiments in Switzerland and Denmark varies just as much between the organic cultivation systems as between conventional and organic cultivation.

"Greenhouse gas balance for the conventional and organic fields is close to each other, but we can also see in our analysis that the climate impact per kg of grain from organic farming is reduced by ensuring a good nutrient supply to the crops, especially through fertiliser," says Jørgen E. Olesen.