Putting raw milk into cold storage impairs its cheese-making properties. This is the result of a study which the Department of Food Science at Aarhus University and Arla Foods have carried out. The impairment is, however, partially offset by the subsequent heat treatment at the dairy.

In Denmark about half of the milk that is weighed in at the dairies is used for cheese production. Research in the Danish-Swedish Milk Genomics Initiative has shown that there can be large variations in the ability of milk from individual cows to be turned into cheese.

Although the majority of cows produce milk with a good ability to coagulate, in up to 20 percent of the milk this ability is impaired or even completely absent. All milk is mixed in a bulk tank on the farm and later in silos at the dairy where it is cooled to 4?C before being further processed.

Scientists at the Department of Food Science have studied how milk with respectively good and bad cheese-making properties react to the cooling process. The studies showed that the milk with a good ability to coagulate was characterised by a higher total calcium content and smaller casein micelles. These parameters are known to be indicative of a good coagulation ability.

The results further showed that the cooling of both the well-coagulated and poorly-coagulated milk resulted in a deterioration of the cheese-making ability of both types so that the time taken to coagulate (RCT, rennet coagulation time: the time from the addition of rennet and until the milk coagulates) was extended by one day when the milk was cooled. Moreover the firmness of the coagulum was reduced in the good milk following the cooling period, while for the poorly coagulating milk there was no further deterioration in the firmness after cooling. The change in coagulation ability during cooling was mainly due to the enlargement of the casein micelles as a function of the cooling process (Figure 1). 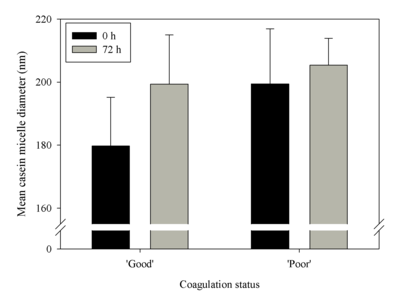 Figure 1: Size of the casein micelles for two milk samples with respectively good and poor coagulation abilities before (0 h) and after (72 h) cold storage at 4°C (n=8)

When the chilled milk is further processed at the dairy, one of the most important processes is heat treatment (or pasteurisation). The effect of pasteurisation on cooled raw silo milk from the dairy was also examined in the project. Silo milk contains a mixture of milks with different coagulation abilities, depending on the quality of the raw milk in the mix. Both coagulation time, RCT and the firmness of the coagel improved after the heat treatment, which was low-temperature pasteurisation at 72 °C for 15 seconds.

The conclusion was therefore that the heat treatment carried out at the dairy primarily to ensure the milk's shelf life and microbiological safety to some extent compensates for the loss of cheese-making properties caused by cooling. However the quality of the raw milk supplied by the individual animals also contributes to the overall quality of the silo milk used.

Read the scientific article on the effect on milk of cold storage: How dairy processing and cold storage affect the milk coagulation properties in relation to cheese production. Journal of Dairy Science and Technology 95: 101-114