Researchers from the Department of Agroecology at Aarhus University, in collaboration with researchers from China and Japan, have investigated how efficiently crops around the world use water as a resource for improved productivity and lower environmental impact in a future affected by climate change

The global population is increasing, and thus, the human demands for water and food steadily increase. In order to secure basic needs for a growing population, studies of the efficiency of crop cultivation in terms of resource use are required, so that better practices for soil and water management can be identified. These practices will ultimately help improve crop productivity in the future, so that food supply can be sustainably maintained in a changing environment.

Researchers from the Department of Agroecology at Aarhus University, in close collaboration with colleagues in China and Japan, have investigated the productivity of croplands and how efficiently they utilise the available water resources.

“One of the main aims of the project was to quantify the productivity of croplands and their utilization of water resources, and how these two aspects are connected. Also, we wanted to investigate whether there is a difference in the efficiency of irrigated and rainfed croplands,” explains researcher Kiril Manevski from the Department of Agroecology.

In order to measure the water use in croplands, the researchers have used an index, the water use efficiency (WUE). It connects water use and crop production. In other words, the WUE index shows the biomass or grain production per unit of water used by the crop.

“We are often asked how crops will respond to a changing climate with changes in temperature, precipitation, and carbon dioxide. These are all conditions that could change how efficiently the crops use the water available. In an attempt to find answers, we conducted a retrospective study, which uses data from a period of 15 years from 2000 to 2014 and includes some of the best available global data sets”, says Kiril Manevski.

The researchers found that the croplands with the highest productivity also used the largest amounts of water. In addition, the project revealed the geographical distribution of the croplands around the world, as well as the trends in their annual WUE.

"It became clear that largest changes happen in large countries such as Brazil, China and India that also produce for the rest of the world. In Brazil, we could see that there is a decline in WUE while it is rising in China and India. Moreover, rainfall appears to be of great influence, regardless of region in the world,” says Kiril Manevski. 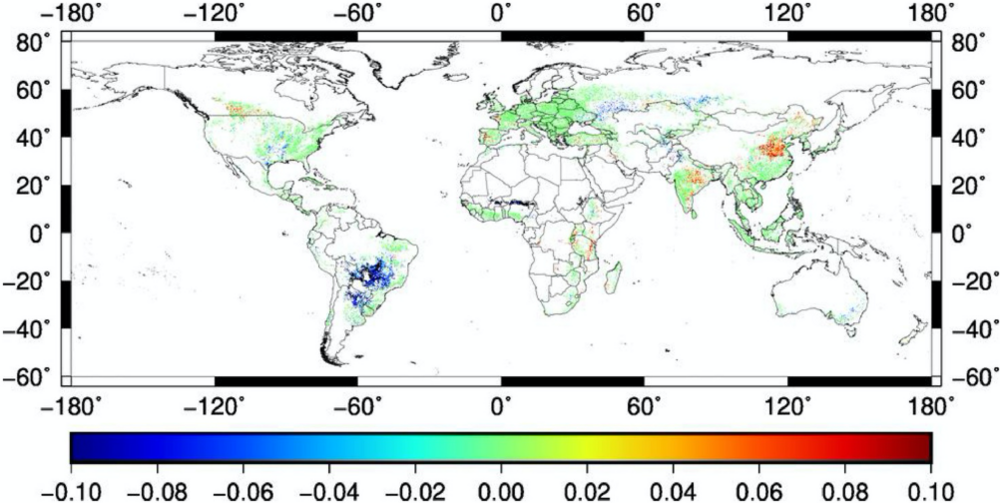 The difference between rain and irrigation is getting smaller

As for all other resource “use efficiencies”, the more water is added or available, the more its use efficiency decreased. The study found a lower WUE for irrigated croplands compared to their rainfed counterparts. However, the difference appears to significantly decrease, at least for the past 15 years.

“We see that the difference between irrigated and rainfed croplands is decreasing, and this is due to two opposing trends; in the irrigated croplands WUE increases, while it decreases in the rainfed. This is an important finding, which sheds a bit of light on the effects of, among others, climate change on the crop water balance and also reveals how people in different countries across the globe attempt to counteract the such effects by making better use of the available water,” says Kiril Manevski.

Water saving irrigation is used to save water, which in many parts of the world is a scarce resource. However, according to the researchers, an increasing number of studies show concomitance with water scarcity, i.e. more freshwater depletion despite higher WUE.

“Actually, there is a need to use less freshwater when the efficiency (i.e. WUE) is high, but that does not necessarily happen in practice. One of the reasons why we are experiencing a depletion of freshwater is that more water is reused to cultivate larger crop areas, crops cultivated with higher intensity, and more water-intensive varieties are used”, says Kiril Manevski.

By comparing maps of WUE and maps of total water storage - an indicator of groundwater depletion originally recorded by satellites from the Gravity Recovery and Climate Experiment from NASA and the German Aerospace Center that quantify in detail the Earth’s gravity field anomalies and converts them in water mass equivalents - the researchers found that increased WUE does not always relate to an increased water storage in the soil.

“Particularly in regions where crop production is highly dependent on groundwater irrigation, such as in the central United States and the North China Plain, northern India and most of southern and south-eastern Europe, we can see that increased WUE is not related to a higher level of groundwater. So, even though the WUE index is a good indicator of how the crops utilize the water that is available both in the form of rainwater and irrigation water, we must from our observations conclude that it is not the best indicator to reflect both water use and actual impact on water resources. We currently work with our colleagues in China on quantifying other indicators for global water use of agricultural land, which shows allocation of water flows to usable and non-usable fractions, giving much better insight on who uses what, when and how,” says Kiril Manevski.

“It is challenging to both obtain and use data on geographical distribution of global croplands, due to their extent and the uncertainties on their classification. The study used probably the latest and rather novel data based on cropland cases, each composed of several crops. This approach is expected to minimise uncertainties imposed by geographical distribution of a single crop around the world. However, uncertainties likely exist, particularly for the irrigated croplands, because differences in definitions used among countries, data types, and image resolution, as well as inadequate data for minor or hidden illegal irrigation. Improved data for global irrigated croplands is therefore needed to improve the estimates,” concludes Kiril Manevski.