Is seaweed a potential feed for ruminants?

Nutritionally, some seaweed species have a huge potential as feed for ruminants. However, according to a study of Norwegian harvested seaweed, in which AU researches have participated, using seaweed as feed is also connected to many challenges. It is, for example, a matter of the seaweed’s content of water, ash and potentially heavy metals as well as the preservation and transport costs of seaweed.

Traditionally, seaweed has been used as feed in areas close to water. The animals have either eaten the seaweed washed ashore themselves, or they have been fed with collected seaweed. Feeding seaweed has especially been done in case of shortage of land-based feed.

Despite the fact that seaweed has been used as feed, knowledge about the nutritional value of seaweed for production animals has been limited. Thus, the use has been based on observations and traditions and the animals’ search for seaweed washed ashore. After harvest, seaweed only stays fresh shortly and needs to be used very fresh or to be preserved.

During the last 5-10 years, the interest for seaweed has increased significantly. The reasons are many, including increased interest for using the sea’s resources, removing nutrients from inlets and the sea, binding carbon, producing energy and protein, producing bioactive compounds and producing health-promoting compounds.

Seaweed and macroalgae are synonyms, and throughout this article we use the name “seaweed”, except from when the three divisions brown, green and red algae are mentioned.

Seaweed is many things

Some of the most striking in seaweed is the great variation within and between species. Table 1 shows the chemical composition and in vitro digestibility for some seaweed species harvested in Bodø, Norway.

Table 1. Various seaweed species harvested during spring and autumn over 2 years. The values represent the average of four samples, except from sea lettuce which was harvested only during autumn.

This article is based on the participation in Norwegian-led and Norwegian-financed seaweed projects: ALTPRO (Norges Forskningsråd), PROMAC (Norges Forskningsråd), PREMAC (Regionale Forskningsfond Nordnorge), OPENMAC (MABIT – Marin bioteknoloi program i Nordnorge). Projects of which the purpose was to study the nutritional and protein value of seaweed and whether seaweed can be preserved (ensiled). The results, on which this article is based, are published as well as in the publishing phase.

The analysed seaweed was washed – firstly in seawater, secondly in a mixture of seawater and freshwater, and finally it was immersed in freshwater to remove sand and salt from the surface. Some samples were analysed for acid-insoluble ash (sand) and showed that the samples were not polluted with sand. 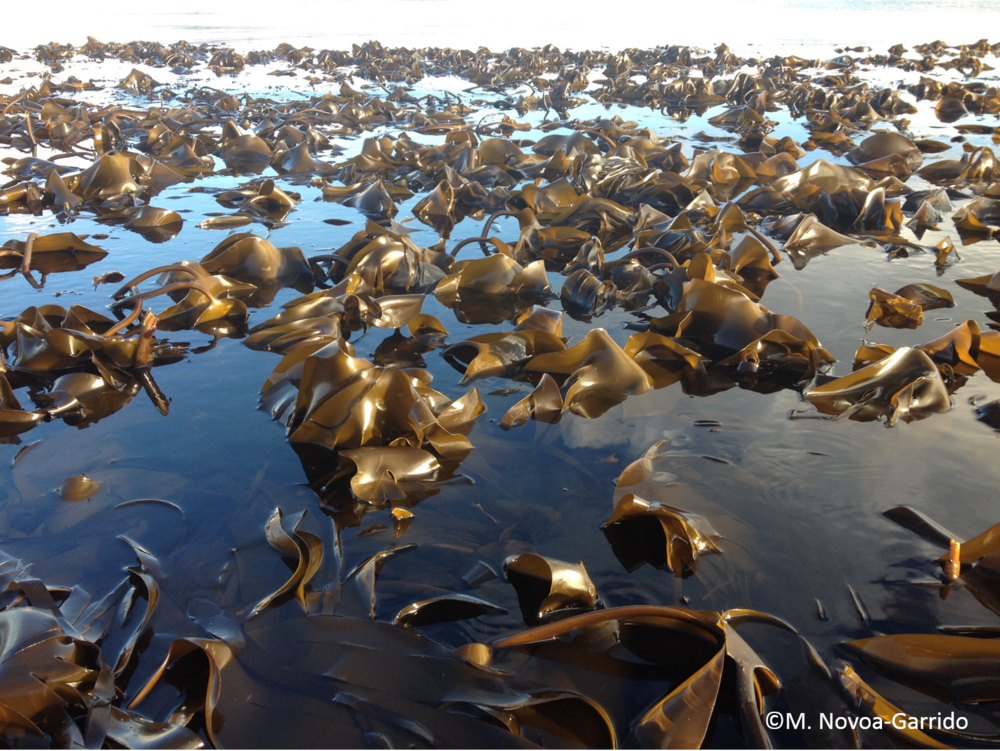 The content of ash in the seaweed samples was significant even though the samples were not polluted with sand. Ash varies from 13 to 48% of dry matter in specie-averages as shown in Table 1, which is very high levels compared to ordinary feedstuff for cattle. Typically, the content of ash is below 10% of dry matter in the feedstuff we use for cattle, except from very soil-polluted grass-clover and beet tops silages. Thus, the content of ash is limiting for how much seaweed can account for in a total ration for cattle, and if seaweed is part of the feed ration, we should aim at taking advantage of the seaweed’s minerals.

The content of crude protein in the brown algae was moderate (9-14%), higher in the green algae (15-22%) and highest in the red algae (18-35% of dry matter). When making an assessment of the dry matter content one should consider the high content of ash. If ash is removed, or normalised to the level of land crops, the protein content in the organic matter, and thus potentially fermentable matter, will increase significantly.

Previously, it has been shown that there is a great variety in the content of crude protein. Here, the crude protein is the content of nitrogen (N) x 6.25. Ruminants like cattle need protein, which is degraded in the rumen and which the microbes can use as a source of nitrogen. Furthermore, they need feed protein, which by-pass the rumen and may supply the cow with amino acid protein besides what the microbes deliver. We have studied the protein degradation in the rumen and the total digestibility of the protein in situ (nylon bag method). Furthermore, we have studied whether the crude protein is based on amino acids and whether the degradaton and digestibility of the total protein reflect how the amino acid part reacts.

The studies show that the amino acid part of total crude protein in seaweed is at the same level as in land-based forage crops and that some seaweed species like for example purple laver seem to have a natural protection against degradation in the rumen while the digestibility feed-faeces is high. According to these studies, a seaweed species like Porphyra sp. will then be a highly appropriate source of supply for cattle with non-rumen-degradable, however digestible, feed protein. A test on sheep confirms that Porphyra sp.(dried product purchased in Asia) has a protein value for growing lambs comparable with soy meal.

Wet harvested seaweed has a very short shelf life. Therefore, it must be used rather quickly, preferably within 24 hours after harvest. Otherwise, it should be preserved. Drying and freezing are both safe methods for preservation, but they are both too costly for large scale use for feed for cattle. In cattle farming, ensiling is the predominant method of preservation. Currently, we are studying seaweed’s preservation qualities. As regards ensiling, there are important challenges, for example the high content of water (and seaweed wilting is difficult with a reasonable use of resources), the high content of ash and the lack of a natural population of the lactic acid bacteria necessary for a normal ensiling and lactic acid fermentation. Preliminary results indicate that seaweed can be preserved by ensiling, but use of lactic acid bacteria as silage additive is required.

Is seaweed tomorrow’s feed for cattle?

Seaweed may be part of tomorrow’s feed for cattle. Nutritionally, some seaweed species have the potential, and some even have a high potential. However, today there are many challenges, including the content of water and ash and the content of problematic substances, like iodine, arsenic, cadmium and other heavy metals, preservation and transport costs.

Furthermore, the price level of seaweed today is considerably above the price level of ordinary feedstuff used in cattle farming. Therefore, an immediate use for cattle will be in areas in which a small part of the feed ration will be expected to have a positive effect on for example health or methane production. In the near future use of seaweed as a major feedstuff  will probably only be realistic if low cost supply is possible, as by-products from another production based on seaweed or where seaweed is harvested in fjords etc. for the purpose of removing nutrients from the aquatic environment.