Carbon is still active after 20 years in the soil

Most carbon atoms are 12C (carbon-12), but the isotopes 13C (carbon-13) and 14C (carbon-14) make up a small proportion of the Earth’s carbon atoms. Carbon-13 is heavier than carbon-12, both are unlike carbon-14 stable; that is, they do not change and thus are not radioactive. Using an advanced instrument called an Isotope Ratio Mass Spectrometer (IRMS), researchers can measure isotope composition on the carbon in the soil.

“When you have a lot of carbon atoms mixed together, almost all of them will be 12C, but there will be a small amount of naturally occurring heavy 13C. The instrument can tell us the ratio between the heavy and light carbon in the soil, in plant material and in the soil's decomposing organisms,” explains researcher Mette Vestergård from the Department of Agroecology at Aarhus University. “And we have used that to investigate what happens to the organic carbon that has been in the soil for many years. We are particularly interested in seeing if it is still part of the biological processes that are constantly occurring in the soil, and not least we wanted to investigate which organisms contribute to the decomposition of the old organic carbon.”

“The plants we naturally have here at our latitudes are called C3 plants. They use the enzyme Rubisco to capture CO2, while C4 plants, such as maize that come from warmer climates, use the enzyme PEP carboxylase to capture CO2 from the atmosphere. Rubisco is a little lazier than PEP carboxylase. That is, the C3 plants use less of the heavy 13C than the C4 plants,” explains Mette Vestergård.

This means that the ratio of carbon-13 to carbon-12 in the soil's organic carbon pools will reflect whether the organic matter originates from a C3 or a C4 plant.

All organisms that live of either the living or dead plants have available plant material that either has more or less carbon-13 in it depending on which enzyme is used to capture and convert CO2. Brand new technology has enabled scientists to measure the isotope composition of the soil decomposing organisms.

Fungi and bacteria break down carbon

20 years ago, an experiment was established in Askov. Here, Danish agricultural soil, in which only C3 plants had been cultivated, was placed in containers, and since then the soil has only been cultivated with maize.

"That is, all the carbon that ever came through plants into the experiment’s soil before the start of the experiment carried the isotope signature for C3 plants. It is 20 years ago today, and during those 20 years all the carbon that has been deposited in the soil has carried the C4 plants’ signature for the 13C-to-12C ratio,” says Mette Vestergård.

“It is interesting because the longer organic carbon has been in the soil, the more difficult it will be to decompose for microorganisms, i.e. for fungi and bacteria . But we lack knowledge about which organisms contribute to the decomposition of the old organic matter. By measuring the isotope composition in decomposing organisms, we can now detect the extent to which they are living from carbon derived from C3 plants, which is more than 20 years old,” says Mette Vestergård.

"It is the old soil organic carbon we're generally interested in, because with the increased CO2 concentration in the atmosphere and the climate change it is causing, we want as much carbon as possible to stay in the soil so it isn’t decomposed and released as CO2 to the atmosphere. And that is why we have investigated what happens to the old organic carbon that has been in the soil for a long time and what kind of organisms participate in the decomposition. The experiment in Askov allowed us to look at carbon that has been in the soil for up to 20 years,” says Mette Vestergård.

To study the decomposition of the different types of organic carbon, the researchers have focused on microorganisms and nematodes in the soil. Nematodes are small roundworms found naturally in all types of soil. The researchers have investigated three groups of nematodes:

The researchers measured the isotopic signature of nematodes to get an idea of ??which organic carbon sources their prey, i.e. the bacteria and fungi, decompose and whether they prefer fresh and easily processed young organic carbon or the older and more recalcitrant organic carbon.

“The most important thing for us was to measure the nematodes that feed on bacteria and fungi. The nematodes that live of the living plants are not involved in the decomposition of organic carbon in the soil, but they work well to check the method. They should show the isotope composition of the current living plants because they feed directly on them. And that is also what our readings show, so they work well as a reference point,” says Mette Vestergård.

The researchers have worked on two different situations, to see how the decomposing organisms work with carbon under different soil treatments. In one treatment, the soil is fed nothing but the dead maize roots and stubbles (MS) left after harvesting the crop. In the second treatment (MS+B), each year for 20 years, the harvested maize plants are chopped into small parts and brought back to the soil. This means that the decomposer organisms in MS+B have a significantly higher amount of plant material to work with.

"So, it turns out that the bacteria attain a lot more of their carbon directly from the maize or maize residues than the fungi do," explains Mette Vestergård.

Compared to the MS treatment, the MS+B treatment did not change the isotopic signature of the plant feeding nematode, but for the other nematode groups, major changes occurred. Suddenly, the bacterial feeders got almost all their carbon from the maize, and for the fungi, only approx. 20% of the carbon came from old organic carbon (See Figure 1). 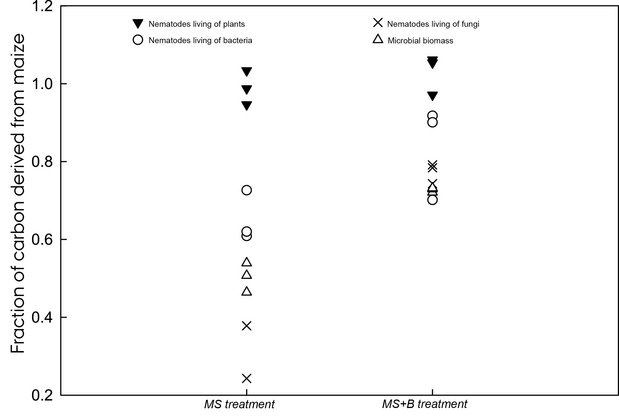 FIG. 1. Estimated share of carbon from C4 plants (i.e. residues of maize plants) in the microbial biomass and in the three different types of nematodes in soil, which has been grown exclusively with maize for the past 20 years. The soil received two different annual treatments: MS, only maize roots and stubbles were brought back to the soil; MS+B, addition of 0.8 kg DM m-2 chopped aboveground maize biomass.

“It shows us that if it is available decomposing organisms choose the easily accessible and fresh organic carbon over the old and more recalcitrant organic carbon. But at the same time, we can see that the isotopic signature of bacterial feeders are close to the plant feeders, while the fungal feeder's share of old organic carbon is somewhat higher. It indicates that the entire fungal-based food chain in the soil relies more on older carbon than the bacterial-based food chain. In other words, the fungi are a little less lazy than the bacteria,” explains Mette Vestergård.

The researchers are surprised that the old carbon still forms a substantial part of the resource base of the food chains in the soil even after 20 years.

"It could be interesting to use a much older experiment and see what happens next, but we just have to wait for the one in Askov to get older before we can do so," says Mette Vestergård.

“Older organic carbon is constantly active and under process, and it is decomposed by especially fungi and fungal feeding nematodes, that is quite new and very exciting knowledge that we would like to investigate further,” says Mette Vestergård.

Conflicts of Interest: None