Biochar and water to solve problems in West Africa

Scientists from Aarhus University are aiming to boost harvest yields and curb deforestation in Ghana with the help of irrigation and the production of biochar. This should result in higher employment, a better economy and a cleaner environment.

Imagine this: A new kind of agricultural production in Africa that gives higher crop yields, improves the soil, reduces deforestation, protects the environment and provides more growth and jobs in the local area – all in a sustainable manner that is tailored to local conditions.

The project in all its simplicity sets out to change some of the management strategies in agriculture in Ghana using simple but modern technologies that use irrigation and biochar at low-tech household level. If farmers irrigate, they can increase the number of harvests in the field. And by using biochar, they can improve soil quality and fertility, protect forests and produce environmentally friendly fuel for domestic use. The increased yields will create more growth and jobs in the local area and thus alleviate poverty. In essence, it is about educating the locals in the development and use of technologies so that the resources – some of which are already present – are better utilized for the benefit of the economy.

- The current agricultural development in Ghana depends on clearing the forests, as they have to use the land to grow crops and the wood for fuel. But deforestation has significant repercussions. Originally, 36 per cent of Ghana was forested. By year 2000, the area had been reduced to 10.2 per cent and now the forested area is probably even smaller, says the leader of the new project, professor Mathias Neumann Andersen from the Department of Agroecology at Aarhus University, and continues:

- It has implications for local people when forests are cleared. The opportunities for collecting fuel, timber, clean water and game and for biodiversity as a whole are restrained. The soil is depleted, yields stagnate and productivity decreases as a result of erosion. And the decline in productivity leads to increased poverty. Together with his research colleagues from Denmark and Ghana, Mathias will attack the problem from several angles.

One of the initiatives that scientists will undertake is to increase yields in fields using small solar-powered drip irrigation systems to be produced locally. By watering during the dry season, farmers can grow high-value crops such as tomatoes, corn and okra and expand by one or two croppings in the growing season. This obviously gives a higher yield per field and a better economy for the community. Nutrients may be added to the water, which will improve yields further.

The temperature during the dry season is usually higher, which can affect flowering and thus fruit setting, so the scientists will also examine the varieties of vegetables best suited for growing outside the traditional season – which may prove to be very valuable knowledge in light of the expected climate changes.

The increased productivity of the land will lead to larger quantities of plant waste – but this is an advantage. This is because the scientists will also explore and develop the use of plant waste for the production of biochar (charcoal) and gas ("wood gas") at household level. When environmentally-friendly wood gas is used instead, this will ease the pressure on forests as a source of fuel. The gas is produced by the pyrolysis of straw – in other words, burnt under oxygen-depleted conditions – at facilities that will likewise have to be constructed locally.

There are also other advantages for the soil and the environment. By converting plant biomass into biochar in household plants and using it in the field, emissions of the greenhouse gas CO2 will be reduced. By adding biochar to the soil, the sequestration of carbon by the soil is increased. This reduces CO2 emissions to the atmosphere and increases soil water-holding capacity. When the soil retains more water, fewer nutrients are leached and soil fertility increases.

- It's a triple-win situation. You get consistently higher yields from irrigation and improved soil fertility, reduced emissions of greenhouse gases from increased carbon storage, and households get green energy from the pyrolysis of straw, explains Mathias Neumann Andersen. 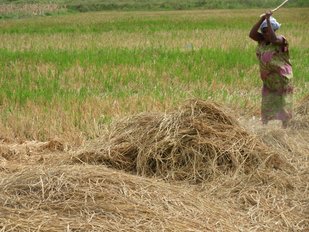 Straw from rice and other crops can be used to produce biochar. Photo: Mathias Neumann Andersen

Facts about biochar and wood gas: