Grass is good in more ways than one

Production of biomass from grass performs well with regard to yield and protein levels, as well as environmental footprint.

Would it not be nice to have a crop that uses the sun’s energy efficiently to produce lots of biomass, contains substantial amounts of protein, and is beneficial to the soil’s nitrogen balance? Sound too good to be true? It is not! The answer lies in grass.

As described in an earlier article about the study, “Grasses are good at using the sun to be productive”, intensively fertilised perennial grasses produced high biomass yields. Although the grasses did not always outperform the other systems with regard to biomass yield, they had added benefits. One of these is that the grasses contained plenty of extractable protein.

The fertilised pure grasses thus produced the highest amount of crude protein annually, ranging from 2.6 to 3.7?ton per?ha irrespective of the year, of which 0.9–1.6?ton?per ha was neutral-, i.e., easily- extractable protein. The unfertilised grass-legume mixtures yielded crude protein amounts comparable to the annual crops in the optimised and traditional systems.

At each of the study sites, the fertilized perennial grasses outperformed all the other systems with regard to nitrate leaching. Compared to the traditional systems at the two sites, nitrate leaching in the fertilised grassed was 70-80 per cent less, in addition to producing more biomass with a high protein content. 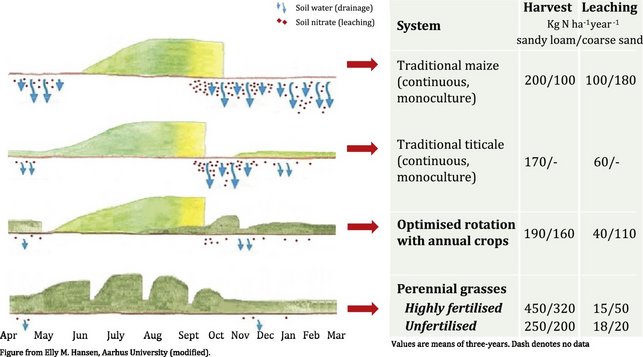 - Production of a broad spectrum of products from biomass is of key importance for an economically viable and sustainable biorefinery sector. For example, the quality of the protein from grasses is often high in lysine and methionine contents, making the grasses particularly interesting source to substitute the environmentally costly imports of soya bean protein. However, growing crops with high biomass yields and high nitrogen levels can significantly alter the agricultural landscape. Understanding the fate of nitrogen in these novel land uses is vital for product optimisation and environmental protection, say Senior Scientist Uffe Jørgensen and postdoc Kiril Manevski from the Department of Agroecology at Aarhus University.

- And we are currently following up on studying the development in soil nitrogen contents, as well as gaseous losses of nitrogen, they add.

Read the article “Grasses are good at using the sun to be productive”.

You can also read the following scientific articles: